How data helps us study some of the biggest questions of our age? 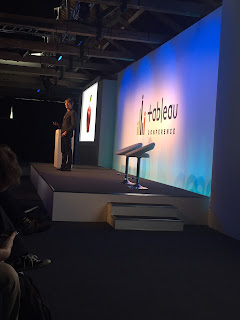 The Theory of General Relativity shows how thinking about fundamental questions can lead to massive examples. Einstein challenged the way we think about gravity and the forces in the universe. 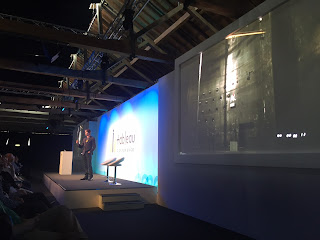 Freefall is a state of rest and a rewrite of Newton's laws. We see this in the International Space Station where everything stays still when released. It's why sitting is hard work because we are under force from gravity.

Einstein replaced force with geometry. Newton's law of attraction was replaced with Geometry (Space Time) - Einstein's Theory of General Relativity. Using Einstein's theory about gravity, you get the idea that the Universe is moving and therefore there was "a day without a yesterday" (Lemaitre). Using the equations therefore predicted what was in the universe before it was discovered and proven. 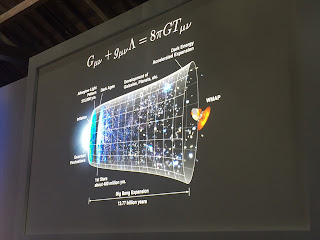 Huble taking pictures of Andromida in 1923 and understanding behaviours of types of stars proved there were other galaxies to our own. Huble went on to use 'Red Shift' to show the expansion of the universe in 1929. 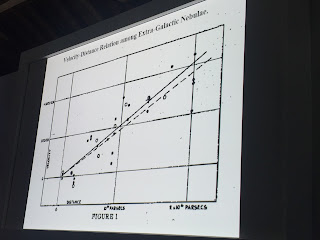 This data is essentially wrong so he was wrong. The data was represented properly but his data was actually wrong (disproven with modern data)! Basically, Huble was measuring the galaxies were too close.

There are 350 billion galaxies in the observable galaxy. There seems to be patterns and therefore, what lead to that sort of pattern is one of the big unsolved problems. If you held a 5p coin to the sky, 75 feet away you would still get 10,000 galaxies in that tiny piece of sky. That means there is a lot of data to analyse.

Gravitational measurement of the stretching and the squashing of space /time. One detector is in Louisiana and one in Washington State. There was a detection made of distruption because of two large black holes merging. The actual event happened over 0.05 seconds. It went from 1/3rd to 2/3rds the speed of light in a 1/10th of a second. It left an object the mass of 60 times the mass of the sun. This is the triumph of Einstein's Theory. It's the first time that light wasn't used and gravitational waves that were.

The idea of the moon before we started exploring our Solar System was of a barren moon (due to our own). This is far from the case. The rings of Saturn are just 2 meters thick but 100km wide. One small moon of Saturn hass water and is very active. These water vents (pictured) is very much like our own start of life on Earth. 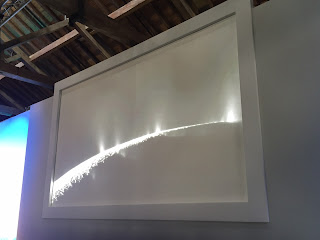 The Large Hadron Collider is producing huge amounts of data and is mimicing the initial collisons that were present at origin of the universe. Dr Brian Cox works on the Atlas detector. It captures Proton / Proton collisions and this actually captures a Higgs particle (Muons are the red lines) 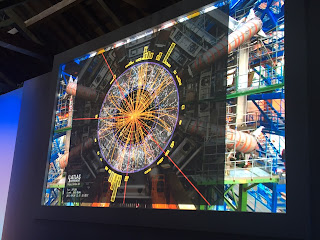 And extra findings like (not statistically proven yet) but there are particles that are not currently recognised that could be dark matter or signs that additional dimensions actually exist. My mind is offically blown right now so apologies for the words after this part... 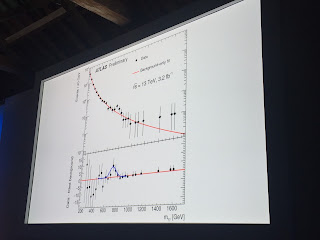 The 90 billion light years across can be measured back to 10 x-22 of a meter across. This distribution helps to predict with precision about the distribution of particles. The eternal inflation model shows that there could be multiple big bangs as part of a longer cycle so there could be an infinite number of universes. Welcome to the Fractal Multiverse!!
Posted by Carl Allchin at 06:23