Every week Andy Kriebel and Andy Cotgreave have been running an initiative to get more people visualising data and thinking about the pros and cons of different visualisation types. I really enjoying seeing what comes through the twitter feed in terms of imagery and discussion about the visualisation.

This week, like a true Sunday in May, it's raining outside so instead of being on the bike, it's time I got stuck in. In my title I describe this as "kinda" Makeover Monday as yes I have written it on Sunday but more importantly it's not a makeover.

The visualisation I have created appeases my own interests instead. When I was 'making over' the original visualisation by taking multiple looks at the data through different charts type (always do this) to see what was coming through the data about the original subject (the increasing imports of middle eastern countries) I found the Soviet Union / Russia position much more interesting.

Despite ending up in a technical job, I am actually a History and Politics graduate and my dissertation was on the Russian Intelligentsia after the fall of Communist Russia. Therefore, when the I saw the dominance of the US and USSR spending throughout the height of the Cold War, I was hardly surprised. When the USSR did disappear, I was expecting Russia to record a huge amount of either Imports or Exports. But no, it took Russia until 2006 to make an appearance after 1993. The provision of Arms by the US doesn't surprise me but the fact that Russia has such a high surplus does. 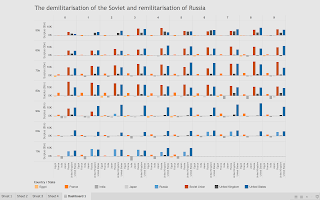 I built this visualisation in v10 beta of Tableau to aid the beta testing so am not able to upload it to Tableau Public but will at some point. I'm still looking forward to seeing what other people come up with but am intrigued as to what other stories are in the data.

The challenge: can you let the user pick the last 'N' amount of values? Easy!

The problem: you have two data sources, those data sources are at different levels of granularity (one months, the other days), they cover different date ranges. Suddenly, not so easy! 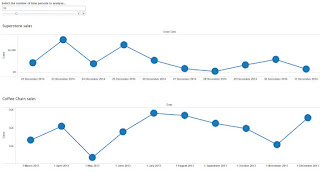 Posted by Carl Allchin at 13:26 No comments: