As soon as Apple Fitness+ was announced, my attention was grabbed and I was intrigued. In a year where any new way to take some form of exercise and enjoy it, has been a tough challenge to find the right thing that worked for me. But I am also a numbers guy so the chance to link together live data on screen about my performance with a decent workout sounded great. I've enjoyed yoga over zoom as I knew the instructor in-person but other forms of exercise didn't appeal. I like competing even if I know I am far from fit at the moment.

Like many people, 2020 has meant I have been a lot more sedentary... like a lot! For background, if you've never met me before, I am 6 foot 3 inches tall and not slim. I've played basketball for years, enjoy tennis but love road cycling. The problem is I'm not the typical build for cycling so weight always plays on my mind. Last year I had cycled 2,975 kilometres (1,848 miles if that's your preference of measurement). How do I know this? Well I said I'm a numbers guy and I mean it. I track all of the rides I do. Here's the view for this year so far: 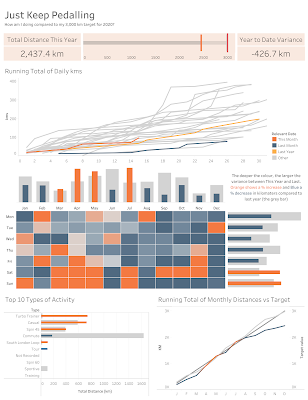 So how have those nearly 500 km less than last year affected me? I'm now just over 100kgs (102.2kgs to be precise as of this morning). This is too much so how did I let myself slide from the 93kg I was at earlier this year?

Due to cycling, I really enjoy spin classes and until February I was loving the classes I took at DigMe in London. We all know what happened next... Covid. I'll be honest, I was hesitant to go to gyms, I still went to a few more spin classes before everything shut down but I did with some hesitation. I stayed active by playing tennis and riding whenever I could but where was there to go? My commute had virtually disappeared so miles on the Turbo Trainer was the next best option.

My Turbo is a 'dumb' turbo trainer. This means there is no data feedback from the turbo trainer so I just literally time how long I can ride for before boredom or tiredness sets in. At least over the summer, I could ride in my garden (I know I'm very lucky) but autumn came and back indoors I went. I actually turbo train in our garage (again I know I'm lucky) but there is no wifi there. I normally download an NBA game, some songs or a TV show to watch to ignore the time I'm on my bike whilst pushing myself through intervals.

I desperately needed some more motivation and that is where Fitness+ came at the right time. As soon as Tim Cook announced Fitness+ I was intrigued. The demo presentation showed numbers being fed back live on screen as an instructor led you through a class. Sessions were split by genre so no I didn't have to listen to tracks that annoyed rather than motivated me. But how did that translate to real life?

Fitness+ requires you to use an Apple Watch and another Apple device to watch the class on. For me, my original iPad Pro from when the model was released (2016?) would be ideal but the Watch was another story.
Tracking my rides on my phone used to be a hassle, especially if you didn't want to ride with your phone in your pocket. The Apple Watch changed. With the Series 2, you no longer needed to ride with your phone on you (although it gave a lot more functionality as I had only the GPS version). I snapped it up early after the release but sadly Apple Fitness+ doesn't work with anything less than a Series 3. I've released a book on data this year so treated myself to a new Series 6 so I could ride for longer in the wild without the fear of my previous watch's battery dying and try Fitness+.
I'll talk about the set-up in a future post as I had a mixed experience.

The two 10 minute classes were as much as me testing the tech out as it was about testing myself. The 30 minute ride today with Gregg was a proper challenge. Having not been to a Spin class for a while due to Covid restrictions I wanted to push myself as much as I could.

My heart rate normally maxes out at 189 when sprinting for as long as I can when running so was happy with how hard it felt. Instructor Gregg did a great job of sign posting as we went through the class what was happening, when we could tail off a little and when to push harder if we weren't feeling 'the burn in our legs'. Riding with power meters (as I do at DigMe), I have a pretty good gauge on this but the 'Burn Bar' helped show where I was at (always at the head of the pack) so my legs and the data was telling me the same story.
How this feedback loop of what's on screen, my fitness levels and how I feel I will see over time. It's a really good start. I'm genuinely excited to do more classes and try non-cycling classes too. I will update as I do.
Class: Cycling with Gregg
Time: 30 mins
Music: Everything Rock
Difficulty Rating: 9 (on a 0 to 10 scale)
Weight: 102.2 kg
Posted by Carl Allchin at 11:55