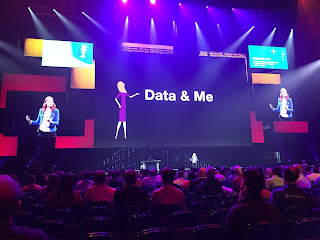 Maths is clean, data is not Mark J (a Wikipedia game) – you keep clicking on the 1st link on a Wikipedia page. Everything gets you back to ‘philosophy’. 95% of Wikipedia searches will take you through to Philosophy.

Mathematicians see 2 separate worlds – the real world and the mathematical world that can describe what is going on around you. Data provides the link between the two worlds. OK Cupid intentionally build in data collection elements. Men’s rating of women is a nice bell curve. Only 1 in 6 women rate men as above average HF started to focus on data with Google Trends – mistyping Google as Googlw is increasing massively. But why are people Google, Google anyway?

London Cycle Hire – spikes found in usage as people cycle downhill but won’t cycle as much back uphill Visualisation of transport mapping for every transport type in London is fantastic. Analysis done on worst place to have an issue and it was found to be Highbury & Islington. There are very few options of a different route if there is an issue there. 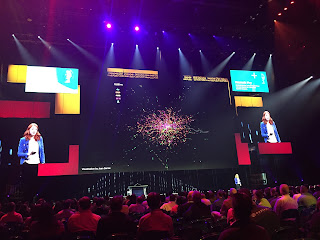 Data isn’t the end of the story it’s only the beginning Team collected gelocated tweets to see the second language in London and where they are located. A French community actually turned out to be one Frenchman tweeting a lot in just French. This led HF to think about the ‘Trough of Disillusionment’ and about what data you leave in or takeaway. Can lead to misleading conclusions.

Austerity issue – economic theory – you don’t grow when you have high debt as a country. New Zealand had only one year (1951) of high debt but didn’t weight the data so the New Zealand result skewed the results hugely. With mathematics you can only have absolute truths where data can be cut in different ways.

‘Street Bump’ app to detect when your car goes over a pot hole so the local government can find road quality issues. But this twisted the results as only the more affluent had smartphones and the inclination to download and use the app (or have a car to ride in). The challenge of encryption is tough but geolocation on your apps show your normal behaviour. Ie when you leave home and posting any gelocational tweets or messages.

The data revolution can give you new insights. A 17 year old boy wearing an Apple Watch showed his heartbeat was very high and remained high after exercise. He went to the doctors only to discover he was having heart and liver failure.

Prediction is the holy grail. Humans have a prediction addiction. “We can predict everything but the future”. HF doesn’t think anyone has made good predictions about the future. Likely is possible but exactly is not possible. Probability is the only way we can really predict what is likely to happen.

Serial killer, Dr Harold Shipman chart of his patients’ deaths showed a massive increase in deaths in the afternoon in comparison to all other doctors. Police want to be able to search through events and find potential suspects. You are looking for trends that rely on very few assumptions. This can be used on infectious disease or bomb factories. 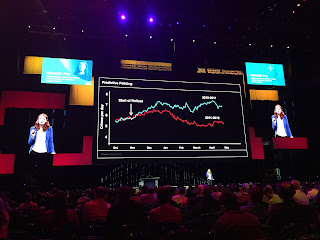